Something magical happens in a little hamlet of Abruzzo called Cocullo, on May 1st: San Dominic statue is taken in procession, covered with… snakes! “That’s hard to believe”, you may wonder. Well, it’s all true and very old too.

The origins of this celebrations are very ancient, dating back to Marsi  and Peligni people, who venerated the goddess Agizia, protector against any type of poisons, including snake ones. Nowadays the celebrations are dedicated to Saint Dominic, a benedictine monk and protector against toothache, snake bites and rabies. He stayed in Cocullo for seven years, leaving there one of his teeth and a horseshoe (which are still sacred relics in town) and villagers are still very devoted to the saint.

The preparations for the feast start in March, when expert people, called serpari, start collecting non-poisonous snakes. The celebrations start with people pulling the little bell in Saint Dominique’s chapel with their teeth (so to protect them against sickness); then, at midday, a processions starts, carrying the statue of the saint, full of snakes, around the town. Two girls, wearing traditional clothes, walk alongside the statue, carrying a basket, filled with blessed loaves of bread called ciambellani, on their heads. At the end of the celebrations, snakes are freed back to nature.

It is a very peculiar and fascinating celebration to take part in. You definitely shouldn’t miss it if you visit the area. 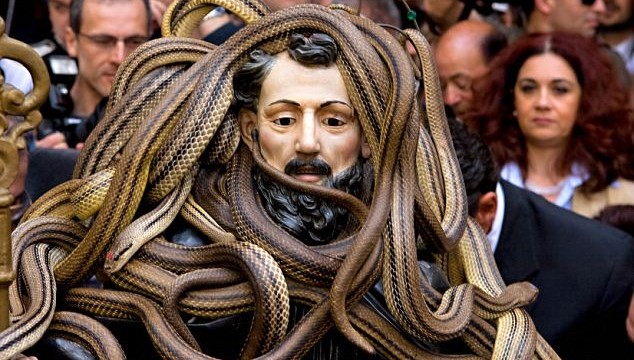